Copa Holdings, the Panama City based airline, is getting ready to launch Wingo, a low-cost subsidiary of Copa Airlines Colombia on December 1, 2016. The new airline will operate in a point-to-point business model with low operating costs and a simple organizational structure to ensure low prices, convenient payment methods, and the option for travelers to personalize their travel experiences based on the amenities and services that they value during their travel experience.

Wingo will be lead by Catalina Breton, director of international planning for New York based Jet Blue Airways since 2014 and formerly with Bogota, Colombia based Avianaca since 2002. Eduardo Lombana, CEO of Copa Colombia will oversee operations, administrations, and finance of both Wingo and Copa Airlines Colombia. 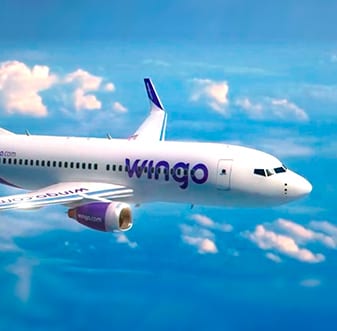 Wingo’s route network will cover 16 cities in 10 countries through Central America, South America, and the Caribbean. The fleet will include four Boeing 737-700 aircraft, each configured for single class seating for 142 passengers. Wingo will also include domestic routes within Colombia including daily Bogota to Cartengena flights, weekly flights from Cali to San Andres, Cartegena to San Andres, Barranquilla to San Andres, and Bogota to San Andres.

Copa Holdings CEO, Pedro Heilbron, believes that Wingo will allow Copa Holdings “to better serve a market segment where many opportunities for growth and development still exist.” Currently, Copa Airlines offers more than 180 daily scheduled flights to 59 destinations in 28 countries in North American, Central America, South America, and the Caribbean. Cope Airlines also provides passengers with access to international flights to over 120 destinations through code share agreements with United Airlines and other airlines.

In 1998 Copa Airlines formed a strategic partnership with Continental Airlines expanding its market and reach. Wingo may soon become one of the leading low-cost carries throughout Central and South American and the Caribbean if it has even a fragment of the success that Copa Airlines and Copa Airlines Colombia have had in recent years.

Wingo flights are scheduled to launch by the end of 2016 with flights out of El Dorado International Airport, Bogota, Colombia, which is ranked one of Latin America’s 50 busiest airports. Wingo’s slogan: Fly Well at Low Prices. Let’s see if they live up to their slogan.

PreviousWhere Are Canadians Traveling This Holiday Season? Depends on What City They’re FromNextTop 5 Tours To Do in Guanacaste