Costa Rica is a world-renowned destination for many things – lots of folks just come for the gorgeous beaches or epic volcanoes. But for athletes, Costa Rica features some of the best surfing in the world. And not everyone knows that! Here is a little guide to some of the most famous and most legendary surf breaks in Costa Rica to aid you in planning your Costa Rica Surf Trip. 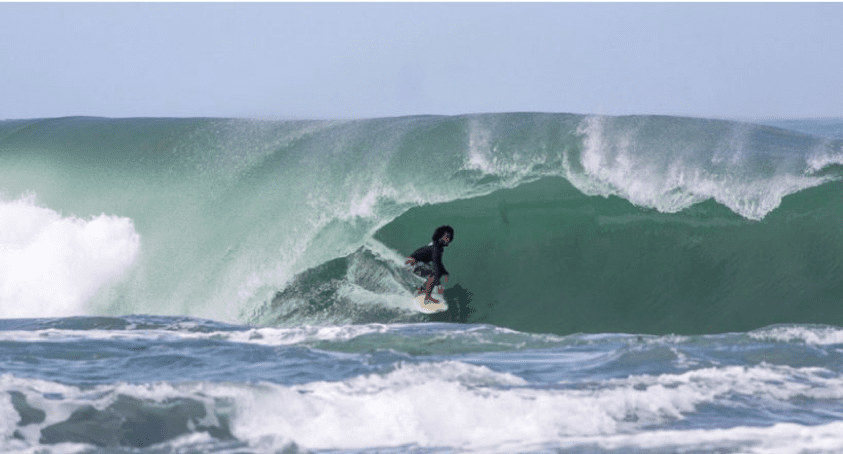 Although you might not have heard of it, Salsa Brava is one of the most challenging and dangerous surf spots in the world. This wave is located on the Caribbean coast of Costa Rica, near the town of Puerto Viejo de Talamanca and draws thrill-seeking surfers from all over the world. Puerto Viejo is a small, lush town located right on the beach in the province of Limon. Over the years with more surfers and other visitors, the town has become increasingly popular among tourists. While hardcore surfers come for the famous waves, non-surfers can try out lots of other activities, explore the local shops and restaurants, or relax on the gorgeous beaches with crystal clear blue water.

The wave at Salsa Brava is said to be the most powerful break in Costa Rica. The name Salsa Brava roughly translates to “angry sauce,” which seems to make sense for the size and power of the wave. It is a heavy reef break that often has barrels similar to those found in Hawaii. It is a right-hand reef break that features fast, hollow, and very strong waves. The wave in combination with the big swells that come from the east and winds from the south makes the perfect, epic combination. The road to get to the break isn’t the best, but it is always worth the drive once you get there. The break is usually fairly crowded, but again, after waiting patiently for your turn to ride, you will be glad you did. The reef, rocks, and undertows are definitely present so just make sure you are looking out for them. For seasoned and professional surfers, this wave is a dream come true. But for beginner and intermediates, this wave is probably more dangerous than it is fun. However, beyond all the obstacles, it is an advanced surfer’s dream and should definitely be on everyone’s list! 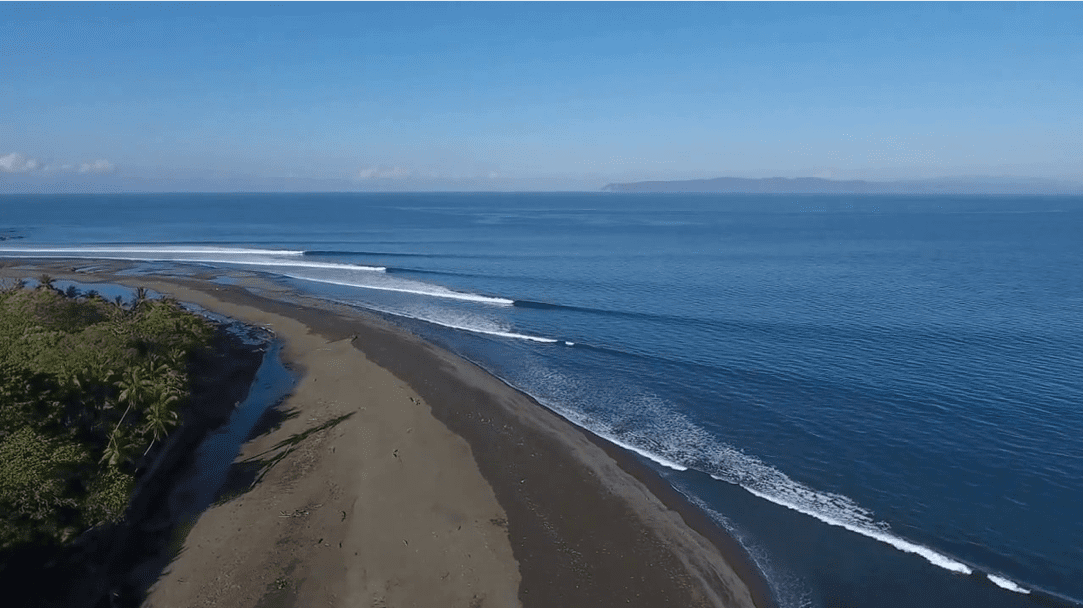 Pavones, a small, relaxed town located in nearly the most southern point of the South Pacific region of Costa Rica. It is a little slice of heaven that thousands of surfers have dreamt of visiting. The waves themselves in Pavones are pretty legendary – if you ask any old-time surfer in the area about the coolest surf destinations, they will more than likely say Pavones. It is considered to be possibly the longest warm water left wave in the world, which is why so many people have tried to surf it, but not many have actually made the journey to make it happen. With the wave situated in the “deep south” of Costa Rica on the southern side of Gulfo Dulce, it is a very unique area but also harder to access.

However, the harder accessibility isn’t all bad. One of the best parts of the town of Pavones is that it hasn’t been as developed with tourism as many of the other well-known breaks in the area. The vibe is very relaxed and quiet, so you can really just focus on surfing and not get too engulfed in the tourist culture, expensive prices, and stress of planning a trip. It is known as one of the most desolate and remote surf destinations in Costa Rica. However, although the town is small and remote, there are still plenty of things to do and a few different restaurants to check out when you aren’t surfing. There are also some waterfalls and nice beaches in the area, lots of wildlife to see, and plenty of birdwatching and yoga for the non-surfers. There is not a lot as far as nightlife is concerned, but the killer waves and simple vibe make up for that in a different way. Although small, there is still a mix of people there from various parts of the world that now call Pavones home. So, if you are looking for a quiet, surf-oriented Costa Rica surf trip, Pavones might be the place for you. 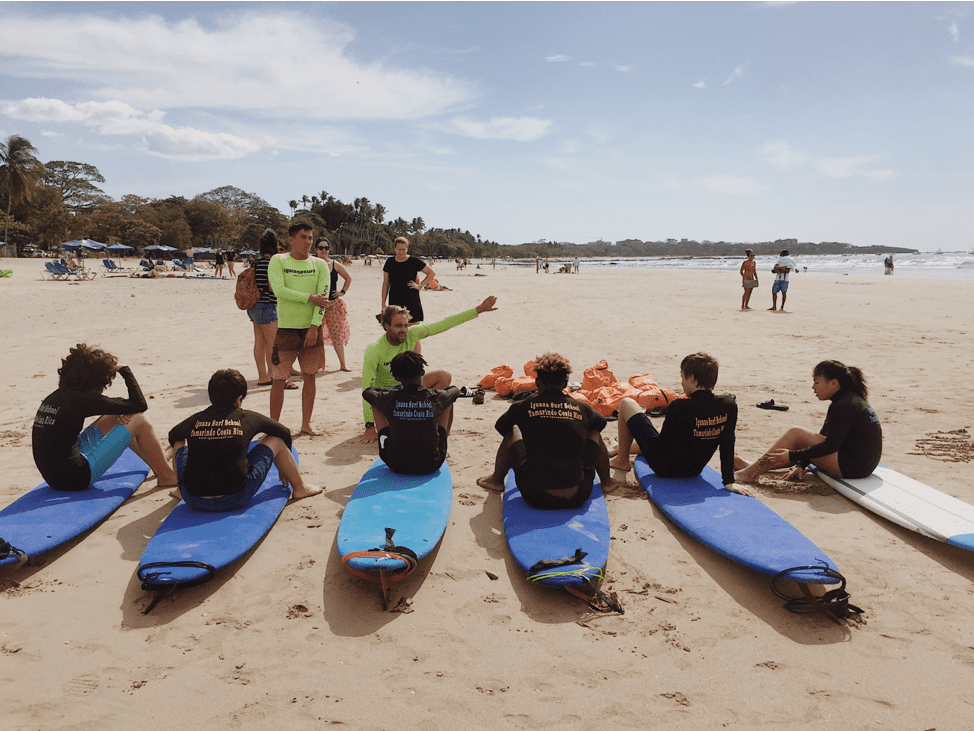 Tamarindo is most well known for being a lively tourist destination with lots to do. Countless restaurants and bars line the beach and the town comes alive at night. If you want to experience a wide variety of activities, meet people from all over the world, and stay on a gorgeous beach, Tamarindo can provide all of that. For those who don’t surf, there are tons of options for activities and tours like zip lining, snorkeling, ATV’s, scuba diving, and more all just right around town.

For those that do surf, Tamarindo is known as being one of the best places in the world to learn how to surf. The warm water, small waves, sandy bottom, and lack of currents make it the ideal place to learn. At some points, the break can get crowded. But Tamarindo beach is long and it is usually possible to find yourself a spot. This is also a great place to take a surf lesson at somewhere very professional and long established, like Iguana Surf. The waves in Tamarindo are sometimes right and sometimes left, and always consistent and fun. And they can get pretty big when there is a good swell, which is when you will see all of the locals in the water tearing it up. There are also a number of fun breaks that are super close to town that is great for more intermediate surfers. Casitas, which is in the mouth of the river, is awesome during low tide when the other waves aren’t. Playa Grande, which is one beach north, is just a little boat ride across the estuary away and perfect for some bigger waves. Langosta, the next beach south, is also a fun spot within walking or a quick cab distance.

Tamarindo was partly made famous by the well-known surfer Robert August. In fact, Robert now calls Tamarindo his home and can often be seen cruising through town on his little orange bike. Tamarindo is featured in Endless Summer II, the sequel to his original film, Endless Summer. For any fans of the movie, Tamarindo is a must-see. Although it has changed quite a bit since the filming of the movie with lots more people and things to do, it is still a quaint little surf town at heart. 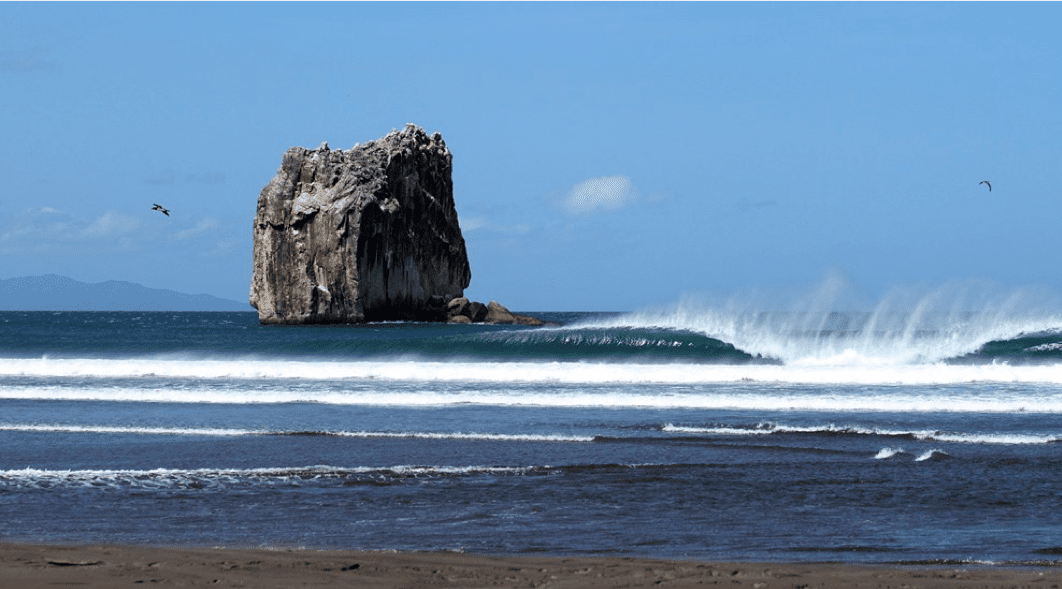 Witch’s Rock (or Roca Bruja in Spanish) is probably one of the most well-known and sought-after surf spots in Costa Rica. It got its name long ago because of a ledge of a witch living inside the island. Sometimes the wind howls around the rock in just the right way that makes it seem like there could be something in there – a little bit eerie but also pretty cool. Located in Santa Rosa National Park, this iconic break is as beautiful as it is epic. After driving into the park, most people then take a boat to get out to the break. There is an entrance fee to get into the national park and the boats also have to be licensed to be in the park, so it is a bit more expensive than other breaks where you just drive up and surf for free. But anyone you talk to will say that it is well worth the trek. Iguana Surf also organizes group trips to Witch’s Rock, so don’t hesitate to inquire with us if you would like to book a spot! These waves are clean and big, with consistent offshore wind. Mid to high tide is when you will be most likely to find the most waves, breaking both left and right and often with beautiful, hollow barrels. Plenty of variety! Witch’s Rock is located just off the coastline of Playa Naranjo, which has surf breaks as well. For those who aren’t quite ready for the powerful waves out by the rock, there are smaller sets on the inside all along the beach that can be surfed as well.

When you are done at Witch’s Rock, you can drive the boat over to Ollie’s Point, another iconic wave well worth visiting. Ollie’s Point was named after the former US Colonel Oliver North because it is close to an old airstrip where, supposedly, the US would supply Nicaragua contra fighters with weapons. It is located further into Santa Rosa National Park than Playa Naranjo and Witch’s Rock, so a boat is definitely necessary. Again, something Iguana Surf can gladly help you with! The wave is a right-hand point break and the bottom is a mix of sand and rock. It is a powerful wave with lots of room for barrel cruising and big turns and tons of fun!

Both breaks are featured in Robert August’s film Endless Summer II and are probably two of the most well-known surf breaks in Costa Rica. When visiting for your Costa Rica surf trip, they must be on your list! 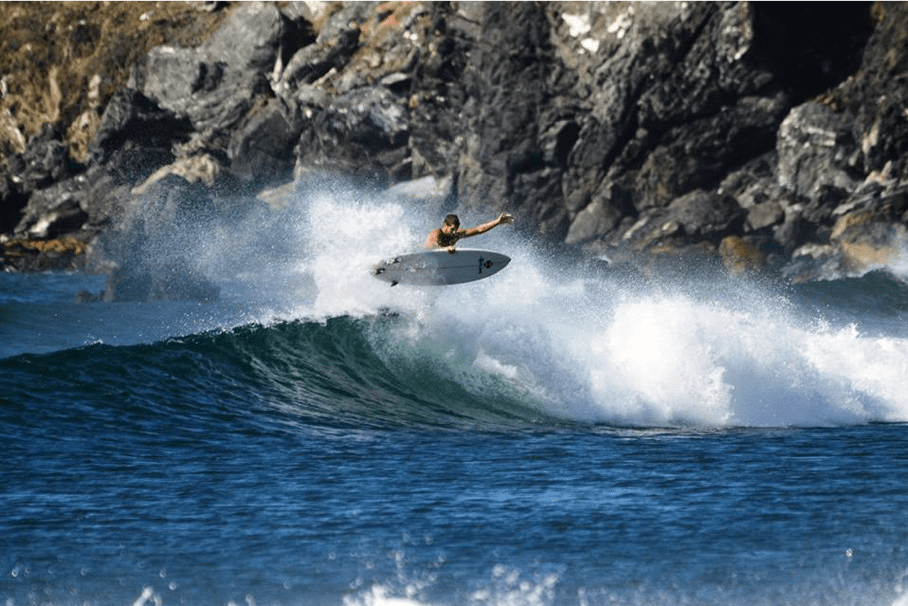 If you are like me, you are now furiously searching for plane tickets, so you can get on a plane and start ripping waves after reading about how much fun there is to be had here in Costa Rica. Whether you are a beginner surfer looking to test your skills or a seasoned professional wanting to try out some of the most legendary breaks in the world, Costa Rica has something for you. Get stoked and we will see you soon!

Skin & Hair Tips For Your Tamarindo Surf Sessions or Anywhere!

Must Try Costa Rica Fruits To Boost Your Surf Session

What it Takes to Learn to Surf in Costa Rica