Whether you’re renting a car in Costa Rica or planning to get around on the cheap, it is definitely possible to get to the best surf spots around Tamarindo and beyond.

With over 1,000 kilometers of coastline and unrivaled waves, Costa Rica is a world-class destination for surfing. The beaches are far less crowded than the ones in Southern California, Hawaii, and Sydney, but are still ideal for shredding. While transportation maybe a little more difficult to navigate in Costa Rica than in these more populated areas, it will be well worth the extra effort! 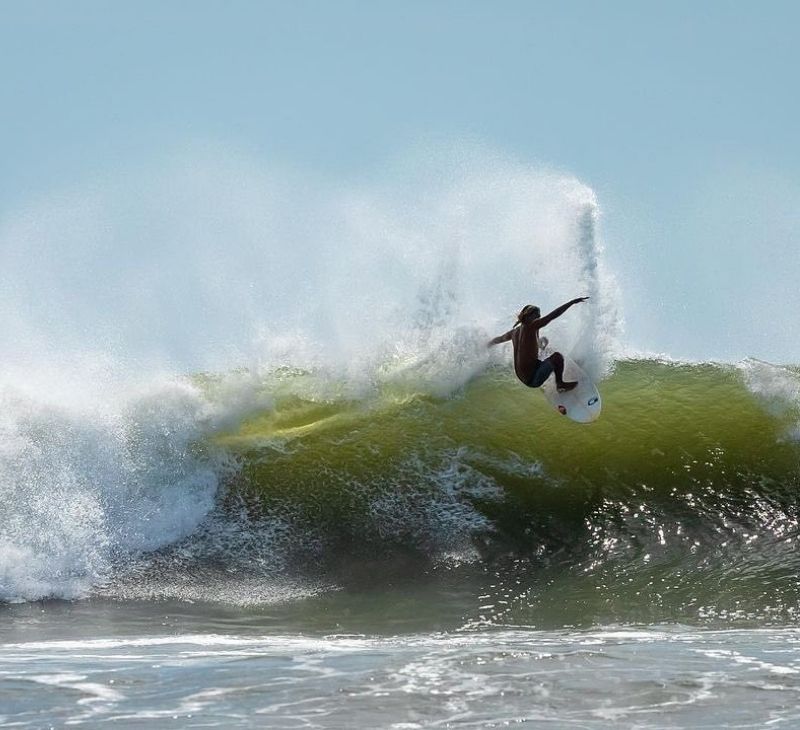 Renting a Car in Tamarindo

Renting a car is the best, albeit more expensive, the choice for travelers. With a car of your own, you can go where you want, when you want. Prices vary depending on the type and size of car you rent, and even the time of year. The most expensive time of year to rent a car in Costa Rica is from the end of December to the end of April. Additionally, Christmas, New Year, and Easter week are peak season times with the highest prices. Typically you will pay $30-100 USD per day (long-term prices also available) for a vehicle, with those requiring an SUV 4×4 paying the most. So, if you’re planning to drive through Santa Rosa National Park to surf at the infamous Witch’s Rock, you’ll definitely need the 4×4, especially during the rainy season. 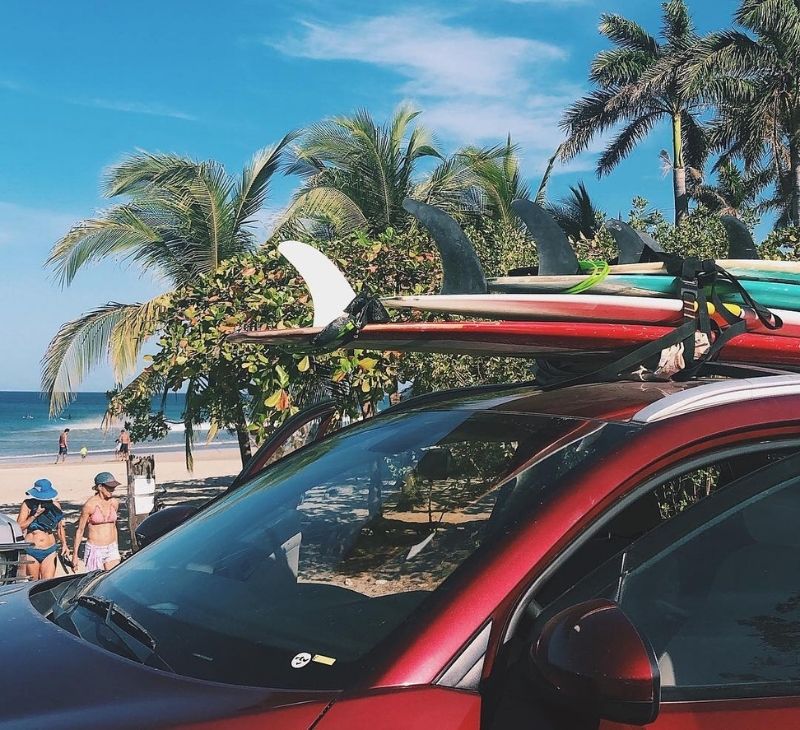 If you’re visiting the Iguana Surf Camp, you may want to look into renting a car in Tamarindo, as opposed to at the airport. Adobe has an office in town and is a trustworthy, Costa Rican-run company, which has been operating in the country for over 20 years. For anyone renting a car in Tamarindo, other rent-a-car offices located in town are Alamo, Economy, Enterprise, National, and some lesser-known companies. We recommend sticking with brands you trust.

In order to rent a vehicle in Costa Rica you must have a passport and a valid driver’s license from your own country. There is also a minimum age requirement for many companies.  Adobe has a minimum age of 23, Alamo Costa Rica is 21, and Budget Costa Rica and Hertz Costa Rica is 25. Budget charges $10 a day for drivers between the ages of 21 and 25, and for those under 21, they won’t be able to rent.

Always make sure you are traveling with your passport, driver’s license, and car rental agreement in case you get pulled over by the “transito” police.

Those of you staying with Iguana Surf will have access to our free airport shuttle from Liberia National Airport. If you’re not staying with us, or flying into San Jose, and looking to reach the coast, there are various shuttles and buses which can be used, including Alfaro, Caribe, Gray Line, and Interbus. Buses are privately run in Costa Rica, so stops and fees are determined by the company. Figuring out a bus route can be tricky due to this and you will definitely want to plan ahead. For those just looking to travel a few towns over, a bus is a fairly simple and cheap option, costing around $2.

A private shuttle is a more expensive option for getting to different surf spots but it will be direct and you won’t waste time waiting and making stops like you will with a bus. Iguana Surf offers a shuttle to nearby Avellenas Beach and offers shuttles to other locations with Caribe. 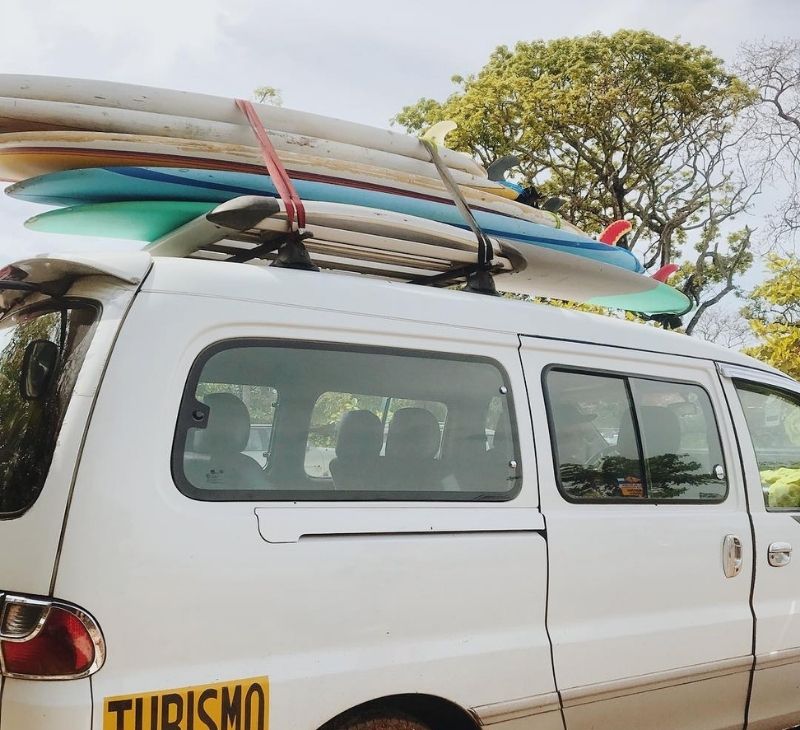 You can find a legal Red Taxi almost anywhere and it’s a convenient and relatively inexpensive way of getting around in Costa Rica. Another common form of transportation is hiring a private car called a colectivo (taxi pirata – pirate taxi). While not a legal form of transportation, a colectivo is a cheap way of getting around Costa Rica. You can find a colectivo by standing near a bus stop, where a colectivo will shout out where they are going and a price, or you can find one by simply standing along the street or walking over to where a few cars and drivers are parked and ask them for a ride. With colectivos and taxis, always determine the price before accepting a ride.

While Uber is not technically legal in the country, it is operating in more and more cities and towns. You can find between 6 and 11 Uber drivers in Tamarindo on any given day. The service is very popular in big centers like San Jose and is easily accessible.

Sharing rides is a common way of getting around Costa Rica. Just join Facebook groups relevant to the town you are staying in, ask around, and you might get lucky. You may also have luck just by making friends with other surfers who want to organize road trips to popular surf spots. Hanging around the surf shops like Iguana Surf will help you find other surfers.

Getting to Nearby Surf Spots 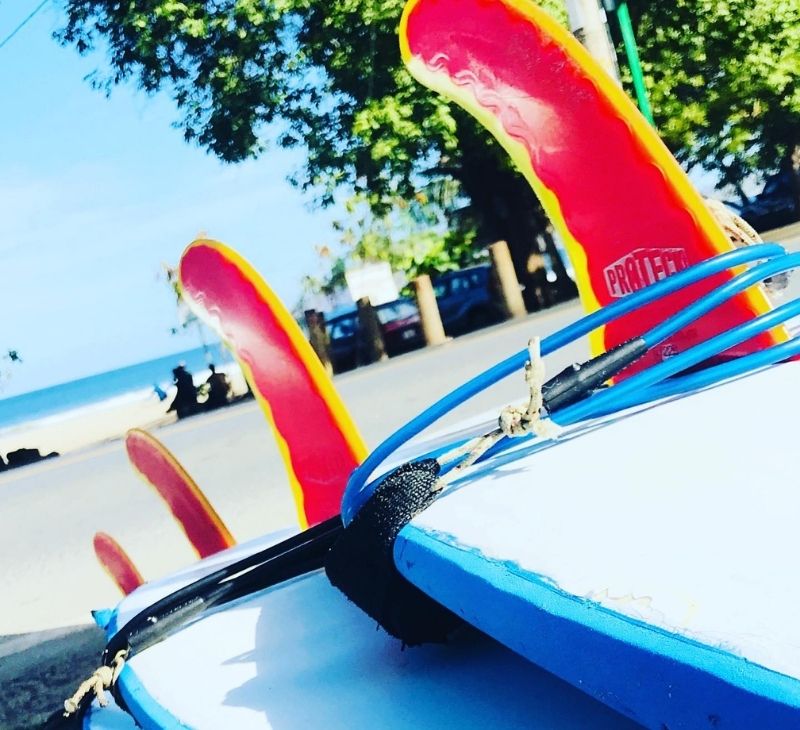 If you don’t have a vehicle of your own, there are still ways to get to the best and closest surf spots around Tamarindo.

Avellanas: Ask the crew at Iguana Surf for a shuttle to this nearby beach. If you’re an advanced surfer, look for a break called “Little Hawaii”.

Grande: You can take a boat across the estuary from Tamarindo beach to Grande beach, which costs about $2 USD. There are many locals with boats who can take you.

Negra: Playa Negra is about a 40-minute drive from Tamarindo. You could take a taxi for around $30-40 (with haggling) or a private shuttle like Tamarindo Quick. Negra is an isolated beach with dirt roads and having a 4×4 is highly recommended.

Marbella: Further south than Playa Negra is Marbella. It is about a two-hour drive from Tamarindo and a private shuttle will cost significantly more than the $40 trip to Negra. If you’re brave enough and traveling light, you can try the bus that runs from Tamarindo to the town of Veintisiete de Abril and catch another bus to Marbella. Prior knowledge of the bus routes and a decent grasp of the Spanish language are recommended for anyone taking this route. Check travel times at horariodebuses.com.

Witch’s Rock and Ollie’s Point: Many around the world first heard about these major swells in the movie, “Endless Summer II”, and they will not disappoint even the most advanced surfer! These surf spots are north of Tamarindo in Santa Rosa National Park and are best accessed by boat. Iguana Surf offers a shuttle boat to these epic breaks from Tamarindo Beach. The 28-foot panga also includes fishing and snorkeling gear and can accommodate you and a few of your friends. A half-day will cost $400 to get you to this remote location with big, hollow swells. 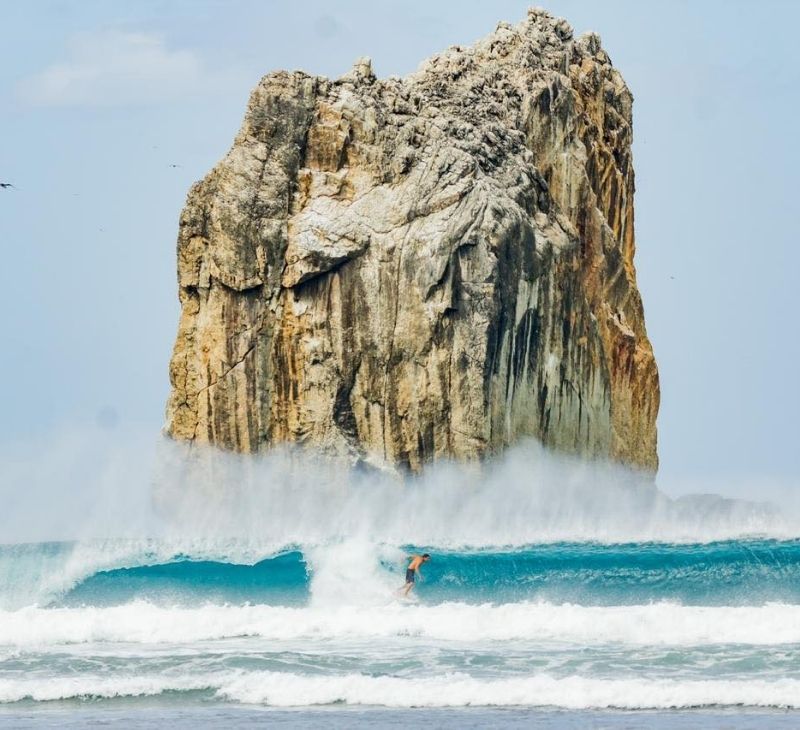 Getting around in Costa Rica has gotten a lot easier in recent years, with Uber, more business websites and Facebook pages, and even domestic airlines opening up, it’s much easier to find a way to get where you are going than ever before. With things like dirt roads and overflowing rivers, travel may take a little more time and patience than you’re used to, but once you get into the flow of Costa Rica’s “Pura Vida” attitude, you find that the beauty of the country, the isolation of the beaches, and the swell of the waves will make it all worthwhile.

Contact us for any help you need with your trip.

PreviousTop Tamarindo Tours to Experience During your Surf CampNextTravel Trends 2021: Why Costa Rica is the Perfect Place to Visit Post Pandemic